Call him a woodchuck, groundhog or whistle-pig, but he’s still my pet garden peeve. What do woodchucks eat? Whatever they want!!! There isn’t much that “Chuck” passes up, although he does have his preferences. In fact, if allowed access to the garden, he can be quite the gourmet. For instance, he waits until my zinnia blossoms are just about ready to bloom, then he eats them all at once. I yell at him and he zips across the yard and squeezes himself under my gazebo. (How can an animal that eats mostly vegetation be so fat?) 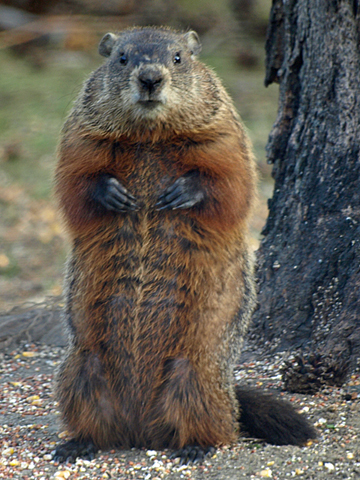 Here are a few woodchuck facts:

The best method of dissuading Chuck from feasting on your garden is a sturdy fence. Dried blood, sprinkled around and on plants also helps, as do commercial repellants. Our garden center carries Bonide Repels All Animal 3 lb. container $24.99. When you pick up your Bonide Repels All at the garden center, ask for our free handout on what Chuck does and doesn’t eat.